‘Even the darkest night will end and the sun will rise’

My approach to Yoga is sensitive and varied, respecting each individual’s uniqueness and starting point. My aim is to share the spirit of Yoga with you and the community through my classes,121s and workshops. I teach small, friendly Yoga classes suitable for all ages and abilities based around Nottinghamshire, Leicestershire and Lincolnshire. 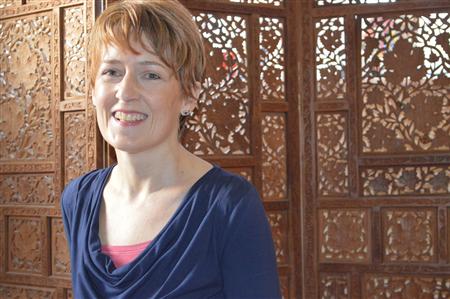 I teach also small, therapeutic classes and one to one Yoga tuition and therapy which is the application of Yoga practices for health and healing in order to alleviate many common ailments. Practices in both 121s, classes and workshops include simple physical postures, breathing techniques, relaxation practices, meditation and study. Most recently I have become a member of the team Bahiayoga at the Nottingham Teacher Training School and have taught Yoga and relaxation for Leicestershire County Council as part of the Health and Well-being programme targeted at specific groups.

My personal experience of Yoga has shown it to be a useful tool for everyday situations and a daily practice has been an incredible support on many different levels. Yoga begins where you are now and this is fundamental to your practice. I continue to study with senior teachers within the aYs as well as attending workshops/retreats and my own 121 sessions.

I began my career in 1994 as school teacher and have been studying and practising Yoga since the mid-1990s. I was introduced to the teachings of T. K. Krishnamacharya by Sheila Baker (The Association for Yoga Studies) and have studied with Ranju Roy and Dave Charlton as part of the Sadhana Mala Teacher and Therapy Practitioner Programme (aYs) recognised and accredited by the British Wheel of Yoga.

The inspiration for my teaching and practice comes from T Krishnamacharya and his son T.K.V. Desikachar. Their approach is to match the practice to the needs of the individual, whatever their starting point and circumstances. This means teaching Yoga respecting the differences in age, gender, mental and physical conditions, culture and religion.

The Sadhana Mala Yoga Teacher and Therapy Practitioner Programme exceeds 750 hours of study, including the study of Yoga philosophy and psychology, the application of Yoga postures and breathing, anatomy and physiology, kinesiology and pathology, educational theory, practice and course planning, and the therapeutic application of Yoga.

Workshops/seminars for Nottinghamshire, Leicestershire and Lincolnshire Yoga Circle and the British Wheel of Yoga.

2013 – Untangling the Tangled Knots – The Viniyoga of twists

2012- The Bandhas: to lift, to open, to contain awareness

2011 – The Energising Qualities of Backbends

2010 – Untangling the Tangled Knots – The Viniyoga of twists

2007 – Exploration and practise around the term, ‘parsva’ and parsva trikonasana

2006 – Exploring backbends with and without support

Workshops and seminars taught in the Krishnamacharya approach to Yoga:

2012 – Introduction to Krishnamacharya and his lineage

The Viniyoga of Yoga

Introduction to the Yoga Sutras of Patanjali

Introduction to Krishnamacharya and his lineage